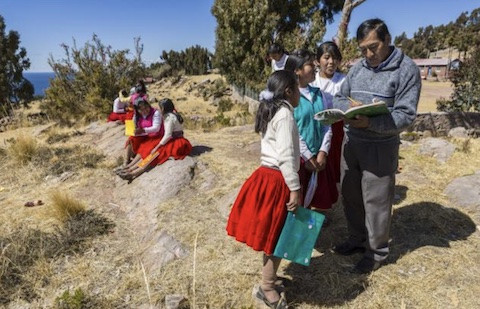 Millions of children around the world do not speak the same language at school and at home. While many countries have policies supporting the use of local languages in the classroom, implementing bilingual or multilingual education remains a challenge. In Latin America, the training of indigenous teachers is a key issue, as shown by a recent comparative study by the IIEP-UNESCO Bueons Aires office.

Multilingualism: A reality in many parts of the world

It has long been known that children learn best in their first language. In contexts where several languages coexist, bilingual or multilingual education is a strategy recommended by the United Nations to achieve equitable, inclusive and quality education by 2030. In India, teachers work in classes where up to 20 different languages are spoken. In Africa, it is estimated that only 5-15% of students know the official international language before they start school.

As for Latin America, Spanish or Portuguese coexist with indigenous languages in communities that are still the most disadvantaged within education systems – both in terms of access to education and learning outcomes. One of the reasons for this is the lack of attention paid to the training of indigenous teachers. This is the subject of the comparative analysis of educational policies (in Spanish), carried out by Sylvia Schmelkes and Ana Daniela Ballesteros for the IIEP-UNESCO Buenos Aires office. The cases of Peru, Bolivia, Mexico and Colombia are studied in more detail.

"The poor planning of indigenous peoples' education, manifested in the neglect of bilingual teacher training ... explains, but does not justify, the serious educational situation in which [these communities] find themselves.”

The model of bilingual intercultural education has been widely developed in the educational and linguistic policies of Latin American countries over the last 25 years. The aim has been both to combat discrimination against indigenous populations and to preserve the languages and culture of the communities. The continent is home to some 560 languages in total, most of which are in decline and some in serious danger of extinction.

Indigenous communities represent at least 45 million people. This corresponds to 8% of the continent's population but 14% of the poor and 17% of those in extreme poverty.

Despite policies that favour the training of indigenous teachers, the continent continues to suffer from a large deficit of qualified teachers who are able to speak the local language in addition to the official national language and to teach in bilingual schools. Among the many obstacles mentioned in the report are: historically weak basic education in indigenous communities due to lack of resources; difficulties related to language harmonization and teaching materials, as some languages are not documented; and what the authors call the "colonization of the consciousness" of indigenous populations in general, and of teachers in particular. "During their time in an assimilationist education system, many indigenous teachers have learned to devalue their language and culture, to integrate as much as possible into the dominant culture,” the authors explain. “And, as a result, to refuse to teach their culture and language in the classroom.”

Despite the specific historical and cultural context of Latin America, similar obstacles can be found in many other parts of the world, hindering the effective integration of local languages and cultures into education systems.

On the IIEP Learning Portal, discover a selection of resources from our library on language of instruction and learning outcomes.

In Colombia, a system by and for indigenous people

Among the national policies analyzed in the report, the Colombian case is particularly interesting and successful. As an alternative to the 'ethno-educational' model that had been prevailing in the country, a truly indigenous education system (Sistema de Educación Indígena Propia) was created in 2007 through the initiative of the communities. It was recognized by the Colombian government two years later.  Within this framework, the Autonomous Indigenous Intercultural University (Universidad Autónoma Indígena Intercultural), based in the Cauca region in the southwest of the country, trains indigenous teachers for all levels of education, with its own curricula and content. It has developed courses of four to eleven semesters for different professional, technical or university qualifications, recognized by the State. For example, it has developed a 'Community Pedagogue' or a 'Mother Earth Revitalization Professional' titles.

"Indigenous Colombians have struggled for many years to have their own needs, values, and rights recognized. The content of the programmes is based on these community and family needs," explains Ana Daniela Ballesteros. However, the approach is not closed and manages to articulate this approach with more universal educational objectives. As such, it is considered good practice.