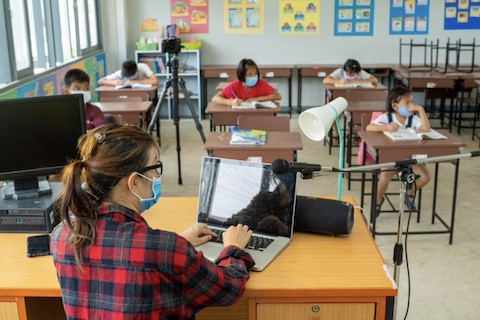 The three winning projects will receive US $100,000 to support their further development.

UNESCO is pleased to invite Governments of Member States and NGOs in official partnership with UNESCO to nominate outstanding projects or programmes for the 2021-2022 UNESCO-Hamdan Prize for Teacher Development.

The UNESCO-Hamdan Prize honours institutions, organisations or educational institutes for exemplary projects or programmes in the field of enhancing teaching and learning in line with UNESCO’s principles and objectives. The Prize also recognises the role of teacher development as an integral element of Sustainable Development Goal 4 on Education.

The winner will be selected by the Director-General of UNESCO, from a shortlist of outstanding candidates prepared by an independent international jury. To be considered eligible for nomination, projects must meet the following criteria:
• the program/project must be ongoing for at least three years
• it must represent an outstanding contribution to the fundamental objectives of UNESCO and the United Nations in the fields of quality education for sustainable development
• the work accomplished must be exemplary and likely to stimulate similar initiative
• it must have shown itself to be effective in mobilizing new intellectual and material resources

Entrants must be nominated by a Permanent Delegation to UNESCO from a member state, or by an NGO in official partnership with UNESCO. Self-nominations will not be accepted. Each member state or NGO can make up to five nominations.

Nominations must be submitted in English or French by midnight (Paris time) on 31 October 2021.

Further information on the Prize is available on the Prize website, and the nomination process is explained in the application guide.

The Prize is funded by the Hamdan Bin Rashid Al Maktoum Foundation for Distinguished Academic Performance of the United Arab Emirates. The Prize was established in 2008 and will be awarded for the seventh time next year. The 2021-22 Prize will be the first since the sad passing of the Prize’s donor, His Highness Sheikh Hamdan bin Rashid Al-Maktoum. The Sheikh will be remembered for his unwavering support for quality education, and for the teaching profession in particular. It is hoped that the UNESCO-Hamdan Prize for Teacher Development will pay tribute to this legacy for many years to come.